Hammer Galleries, headquartered in New York, focuses on Impressionist and Modern Masters. The gallery also exhibits contemporaries such as Chinese artist Yifei Chen. Hammer participates in the world’s most prestigious art fairs: The European Fine Art Fair (TEFAF) in Maastricht and New York and Art Basel in Miami Beach and Hong Kong. The gallery’s founder, industrialist and philanthropist Dr. Armand Hammer (1898–1990), was Chairman of Occidental Petroleum. Known for his “citizen diplomacy,” he traveled the world, befriending world leaders in his lifelong quest for world peace. During the 1920’s when the newly formed Soviet Union was in dire financial straits, the then 23-year-old Hammer met Lenin and developed several successful ventures in Russia, and began collecting Czarist art with his brother Viktor. This was the origin of both the Hammer Galleries (established in 1928) and Hammer’s legendary personal art collection.


The relationship of Hammer Galleries and China began in 1979 when Dr. Hammer met Vice Chairman Deng Xiaoping at a dinner in Houston, Texas. Deng recognized him, saying “you don’t have to introduce yourself. . . . We all know you in China. You’re the man who went to Russia in 1921 to help Lenin when Russia was in trouble. Now you’ve got to come to China.” Hammer was granted the unprecedented privilege to land his private 727 jet in China and was invited to stay at the Diao-Yu-tai State Guesthouse, an ancient retreat of the Emperors where Presidents Nixon and Reagan stayed during historic visits to China. He was accompanied by his grandson Michael Hammer, then the youngest Occidental Petroleum executive on the team and currently Chairman of Hammer Galleries. During that first visit, Dr. Hammer negotiated major business deals for oil and coal between Occidental Petroleum and his new Chinese partners.

In 1982 the finest pieces from Hammer’s personal collection, including masterpieces by Rembrandt, Rubens, Monet, Renoir, Cezanne, Van Gogh, etc., were loaned to the National Art Museum of China in Beijing. This landmark exhibition provided the first opportunity for original Western masterpieces to be viewed in China. Hammer later sponsored the first travel of Chinese pandas out of the country, in conjunction with the 1984 Olympics in Los Angeles. For Art Basel Hong Kong, we were especially pleased to present four paintings by Chinese artist Yifei Chen (1946–2005). In 1980, Chen became the first artist of his generation to travel to America. Discovered by Armand Hammer in 1981, Chen had his first U.S. exhibition at Hammer Galleries in 1983. Coincidentally, this was the same year that Howard Shaw, Hammer Galleries’ Director, began his career at Hammer Galleries. Mr. Shaw worked closely with Chen on all of the “sell out” exhibitions which followed.

In 1985, Armand Hammer presented Chen’s painting Memory of Homeland–Double Bridge to Deng Xiaoping. In recent years, Hammer Galleries has reacquired paintings by Yifei Chen and sold them to collectors in Asia, and his paintings continue to set new records at auction. Chen, educated in both Chinese and Western traditions, was taught by the last generation of Chinese painters to have studied in 1920s Paris. Chen’s favorite symbol, the bridge, traditionally represents the union of man and nature, as well as the meeting of East and West. Chen’s dreamy subjects, the waterways, canals, streets, and the 1000 year old bridges from Suzhou, the “Venice of the East,” recall ancient China. Chen’s art suggests a type of poetry without words whose most striking character is its atmosphere of “silence and stillness.”


For the last years of his life Armand Hammer had three paintings in his office at Occidental Petroleum—one by the Old Master Peter Paul Rubens, one by Yifei Chen and one by Huang Zhou (a gift from Deng Xiaoping and just last year returned to China). We were honored to exhibit at Art Basel Hong Kong, presenting an array of works by Impressionist and Modern Masters as well as a special exhibition of paintings by Yifei Chen, continuing the Hammer tradition of cultural exchange. 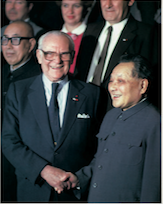 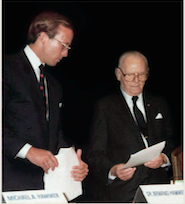 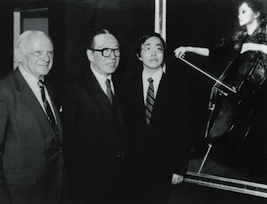 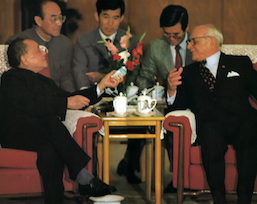 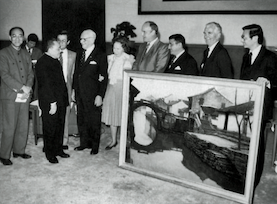 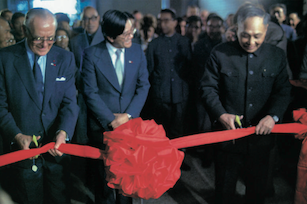 Dr. Hammer and the Vice minister of Culture,
Mr. Situ Huimin, cut the ribbons to open the exhibition
of The Armand Hammer Collection at the China
National Art Museum in Beijing 1982

Photos no. 1, 5 and 7 by John Bryson from The World of Armand Hammer

The presence of Hammer Galleries at Art Basel Hong Kong marked a new phase in the long standing relation between the Hammer legacy and China. This began with the epochal meeting of Dr. Armand Hammer to Chinese leader Deng Xiaoping in 1979 which commenced a new stage in the fruitful relationship between the two nations expressed in business, art, and culture.

It was fitting that the collection brought to China by Hammer Galleries featured Impressionist and Modern masters including Renoir, Matisse, Picasso, Modigliani and Chagall. These artists, representing Impressionism and the School of Paris, shocked the world because for the first time, art refused to look back into the past. Their first collectors were industrialists and business innovators, who shared the artists’ passion for the new. The audience for these works quickly became international, and at the beginning, Americans predominated.

Every major museum regards these artists as crucial to the representation of western art. Consequently, fewer examples every year become available to private collectors. Nonetheless, collections continue to be initiated by Brazilians, Indians, Middle Easterners, and most notably today by Asians, who bring to this field unprecedented economic prowess and an aesthetic tradition dating back thousands of years.

The links between Impressionist and Modern Art and the aesthetics of Asian art are numerous. French chinoiserie became fashionable in the 18th century, when European craftsmen produced items in the Chinese taste, modeled after Chinese export porcelain. The greatest European museum of Asian art, the Musee Guimet in Paris was founded 1879, at the height of Impressionism. By 1900, Art Nouveau, based largely on Asian design principles, achieved universal acclaim. Impressionism’s first masters, Renoir, Monet, and Degas, were admirers of Asian art, and favored its stylistic flatness, cropped silhouettes, and nearly abstract decorative effects, an approach which was further developed by Matisse, Picasso, and Modigliani.

Impressionism, where modernism began, followed by the 20th Century School of Paris, became known for rejecting past artistic practice, embrace of subjects from their own time, and freedom to achieve stylistic innovation for personal ends. Renoir, the greatest portraitist of Impressionism, is represented here by an intimate depiction of one of his favorite models, Gabrielle Renard. This painting appears to pulsate with life, painted with lively feathery brush strokes in rich cadmium red and yellow gold,subtle shading in hues of olive. Its atmosphere of soft outdoor sunlight conveyed through painterly textures makes this piece a signature work of Impressionism.


Matisse and Picasso were rivals in the next generation, leading innovation and influencing the entire 20th century. Matisse, achieved initial fame as part of the group known as “les fauves” (French for “wild beasts”), using high keyed color, determined by emotion and intuition rather than descriptive fact. Matisse, like Picasso, was obsessed with female subjects. In his elegant 1919 portrayal of a woman in an armchair, he emphasized the striking contrast between his model’s vibrant green sash, off-white dress, and dark hair and complexion, accentuated by her necklace and bracelet.

Picasso became best known for his exploration of spatial form, whose geometric underpinnings earned it the name cubism. Both developed a succession of modes from these primary styles. Picasso’s engagement with the next major art movement, surrealism, is shown in his masterful 1941 portrait of his mistress, Dora Maar. Its angularity and distortion contrasts with Picasso’s 1932 voluptuous portrayal of yet another mistress, Marie-Thérèse Walter. His reclining nude of 1960, a tribute to his second wife, Jacqueline, similarly portrays an array of sensuous feminine curves.

Modigliani, never conformed to Fauvism or Cubism, but coined his own personal brand of Expressionism, producing only 347 documented oil paintings before his death at age 35. His portrayal of a young girl from 1919 typifies his style of refined linear contours, terra-cotta flesh tones, gestural brushwork, and almond shaped eyes.

With these Impressionist and Modern masters, Hammer Galleries celebrates the continuing interchange between East and West through shared connoisseurship and offers to the Asian audience the opportunity of viewing and acquiring some of the most important available examples. 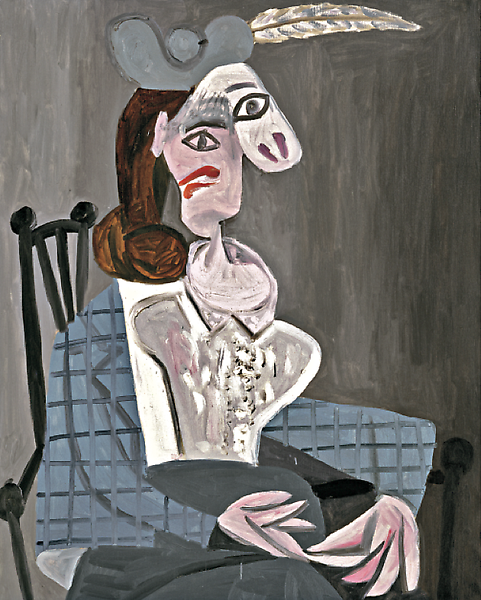 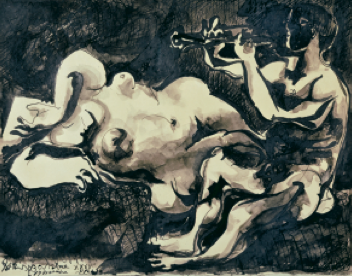 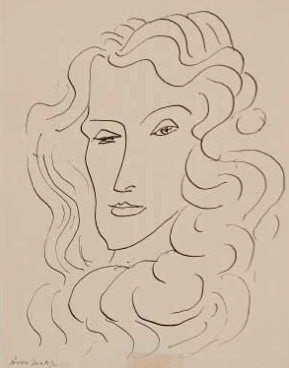 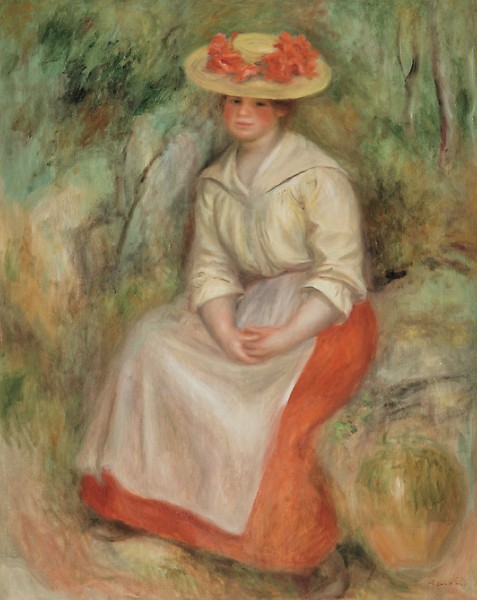 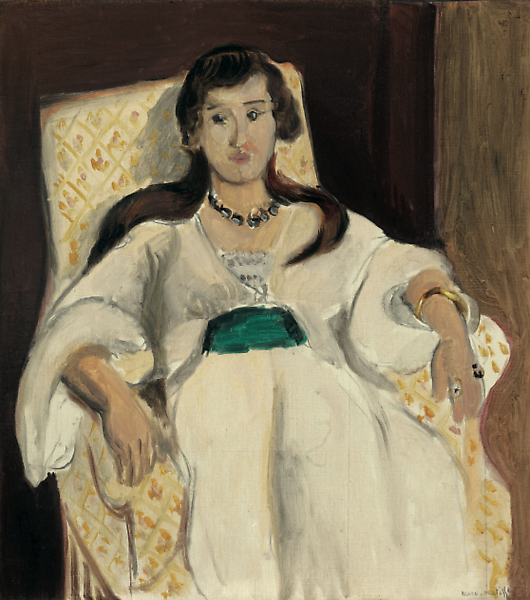 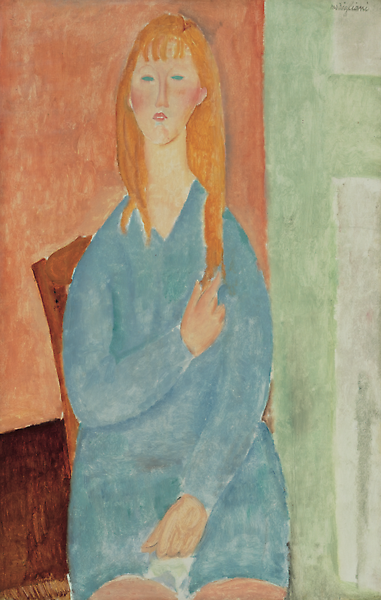 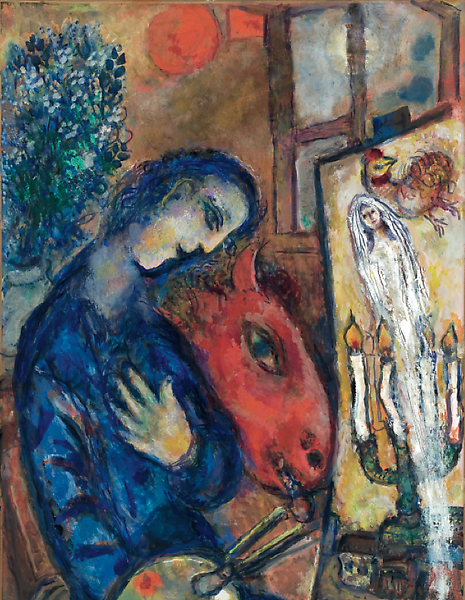